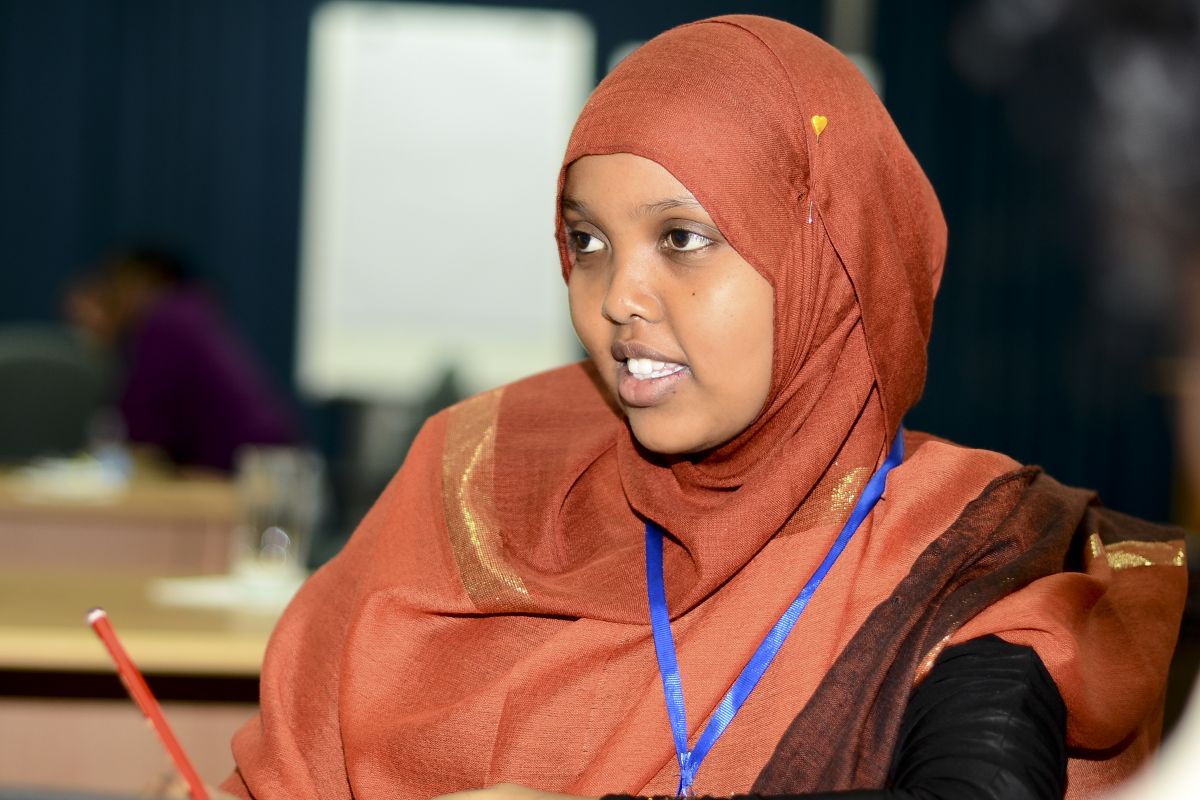 From Beneficiary to Benefactor

Lul Omar was brought up by her grandmother after she lost both her parents when she was still a toddler. Luckily, her grandmother took her to primary school in Rhamu, a tiny town in North Eastern Kenya.

As an orphan, life was not easy for Lul. Her grandmother sold paraffin to feed and educate her and four other siblings.

“Life was hard when I was growing up but I persevered. My teachers were very supportive as they kept encouraging me to work hard. They would always give me books when I was in school as well as sanitary pads which were a precious resource in Rhamu,” says the 22-year-old.

But just like any other girl in the area, there was pressure to get married at a very early age. Some of her peers succumbed to the pressure and whenever she visits her rural home they envy her and regret their decision. One of her best friends is now married and has five children without any education. “She was a bright student but she succumbed to the pressure,” says Lul.

But her quest for education was reinforced further when she met an employee of UNICEF--Amina Ibrahim--who visited their school and gave them a talk on the effects of early marriage. “I got more determined not to get married before achieving my dream of getting an education when I realized that she was in the same school—Rhamu--where I had also gone to. From then on, I knew the only way to succeed in life was to get an education,” says Lul.

After completing her primary education in Rhamu, Lul was admitted in a secondary school in Gatanga, Muranga County – some 800kms away from her home. She faced a few challenges key among them her religion and the cold weather. “I was one of only two Muslim students in the school and many girls were initially not very accommodative. But over time, they came round once they understood Islam as a religion. The cold weather, which was a stark contrast from the weather back home also constantly made me sick but I persevered through the four years.” Says Lul, as she reminisces of the challenges she went through.

However, even after joining secondary school, pressure to get married never ceased. There were many attempts and coercion but she remained adamant that she wanted to complete school and go to college.

After completing her secondary education, she was looking for an organisation to help her pursue further education and Amina was at hand and introduced her to Global Give Back Circle (GGBC). It’s during this time that she came to know of Kenya Community Development Foundation (KCDF) as the organization propelling the Give Back Process because she had to drop the application at KCDF.

“I always wanted to be a doctor because I felt mothers should not die when giving birth, something that was very common in my community. I felt that I would help them with safe delivery when I became a doctor but since I didn’t qualify to become a doctor, I opted for something closer—Public Health,” she says. GGBC and KCDF then supported her throughout her Diploma in Public Health course at the Technical University of Kenya.

“Not only did GGBC and KCDF support my education, they also linked me to a mentor, Brenda Wanjiru, an employee of Safaricom whom I could meet every fortnight and any other time I wanted to see her. Despite coming from a different religion, she became like my mother because there was no barrier between us and I would ask her all the questions I would have asked my mother had she been alive,” says Lul. She has not only taught me how to relate and give my time to other people, she also taught me public speaking skills as well as how to manage my finances,” says Lul who has already started giving back by talking to and mentoring young girls on the negative effects of FGM in schools in Rhamu.

“I have learned that mentorship is an important role for orphans to do well in life. My mentor has advised me, inspired me and made me achieve what I would not have achieved in life on my own,” she says.

“I would like other girls not to be hoodwinked to get married early because that will not help them. They should pursue education because that is what will give them a bright future,” says Lul who has just completed her Diploma in Public Health.

As a Public Health Officer, Lul would like to go back to her home and continue the fight to eradicate FGM because she has realized that it has more harmful effects than positive ones having gone through the same. “I realized that the practice is unhygienic and can spread diseases because sometimes they use the same blade on all the girls and one can even bleed to death,” she says.

But even before she graduates, her to-do-list is near full. Lul would like to bring change to her community. She wants mothers to deliver in hospitals and not at home as is the practice to reduce deaths of mothers and children. “Children need to see their mothers and experience the love I missed when I was growing up,” she says.